Anger Increases in Haiti Over Weapons From US 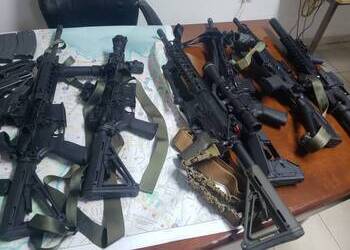 A string of recent arms-trafficking scandals in Haiti has ignited anger over a steady flow of US guns that are fueling gang violence.

Haiti’s customs agency on July 14 seized shipping containers holding 18 “weapons of war,” four handguns and nearly 15,000 rounds of ammunition that were shipped from the US to the Episcopal Church of Haiti, which said the documents had been falsified and that it had nothing to do with the containers.

Separately, police investigating gun smuggling this month arrested a state prosecutor and a prominent lawyer who, according to media reports, served as an adviser to Haitian Minister of Justice Berto Dorce.

Guns brought illegally to Haiti are often used in gang wars such as a recent turf battle in the town of Cite Soleil, which between July 8 and 17 left more than 471 people killed, injured or unaccounted for, UN data showed.

“This is the tip of the iceberg,” said Lareche, who says the murder of his sister and brother-in-law led him to speak out while in office about customs corruption and its link to gun trafficking.

Most of the weapons are smuggled from the US to Port-au-Prince, he said.

“It’s some of our citizens in the US who are sending weapons to Haiti and are thus fueling the insecurity,” said Pierre Esperance, executive director of Haiti’s National Human Rights Defense Network.

A shipping document for the cargo labeled as for the Episcopal Church described the contents as “Donated Goods, School Supplies, Dry Food Items.”

In another case, police early this month arrested Michelet Virgile, a state prosecutor for the town of Port-de-Paix after he unexpectedly released two men who had been jailed for the illegal import of 120,000 rounds of ammunition.