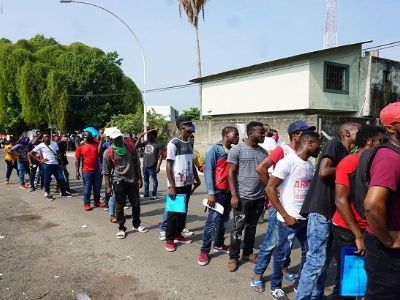 Local media in Saint Kitts and Nevis reported on Friday that the closure of the polling stations was carried out as planned. At the same time, the vote count continues, which will give the official results of the general elections held this Friday in the Caribbean country.

According to the information disclosed, there was a good turnout of voters at the entrance to the schools shortly before opening at 07:00 (local time), with the majority starting at the scheduled time. However, there was a delay in the polls of the Kim Collins Sports State.

The supervisor of elections, Elvin Bailey, explained that due to this late opening, for the voters of the said area, the voting time would be extended. “Those who were delayed due to the new opening will be given additional time. Those polls will not close at 6:00 pm (local time),” he said.

St. Kitts and Nevis Prime Minister Dr. Timothy Harris, passing through constituency seven, offered statements to the press in which he expressed confidence that his Team Unity coalition would maintain leadership in the country.

“Regarding the rest of the country, we are confident that, based on our performance, we will undoubtedly have a resounding victory today,” he said, noting that participation had been outstanding in the electoral colleges of that constituency.

He also stressed that the promise of a safer future made by his coalition would, if he wins, double his efforts to keep the country safe.

“The stronger future is necessary because we need a stronger economy that comes out of Covid-19 to put more people to work and find resources to maintain services and the public infrastructure program,” he said.

The current Prime Minister, Timothy Harris, has been in power since 2015, and his opponent in these elections is Denzil Douglas, from the Labor Party, who ruled the country from 1995 to 2015.

The elections will also renew the 11 seats in parliament, eight of them belonging to Saint Kitts and three to the island of Nieves.

Counting continues, and results are expected in the next few hours. (https://www.telesurenglish.net/news/Election-Day-Ends-Successfully-in-Saint-Kitts-and-Nevis-20200605-0015.html)