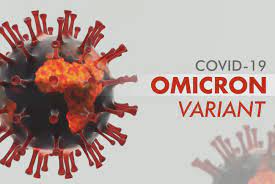 Daily COVID-19 infections have hit record highs in the United States, swathes of Europe and Australia as the new Omicron variant of the virus races out of control, keeping workers at home and overwhelming testing centers.

Almost two years after China first reported a cluster of “viral pneumonia” cases in the city of Wuhan, the regularly mutating coronavirus is wreaking havoc in many parts of the world, forcing governments to rethink quarantine and test rules.

Although some studies have suggested the Omicron variant is less deadly than some of its predecessors, the huge numbers of people testing positive mean that hospitals in some countries might soon be overwhelmed, while businesses might struggle to carry on operating because of workers having to quarantine.

The average number of daily COVID-19 cases in the United States has also hit a record high over the past seven days, according to a Reuters tally. The previous peak was in January of this year. (Reuters) Previous Story
The WHO Sounds Warning Over the Fast-Spreading Omicron Variant, Biden To Expand COVID Testing and Global Stocks Gain as Appetite for Risk Stages Comeback
→

Next Story
Ómicron begins to gain ground in Dominican Republic representing 41% of infections; those of delta 59%